Posted by TCS/Choate on 8/27/2019 to Product Spotlight
The Country Shed is now offering the NEW and innovative Mossberg 500 & Maverick 88 Shotgun 12ga & 20ga Accessory Rail & Sling Mount From Choate Machine and Tool. Made In The USA.

Bald Knob, AR – Choate Machine and Tool, a leading designer, manufacturer and OEM supplier of rifle stocks, shotgun magazine extensions and firearms accessories, introduces the Night Manager Accessory Mount for Mossberg 500 and Maverick 88 shotguns.  This sling and accessory mounting system has indexable Picatinny rail sections to add a light or laser as needed to the popular Mossberg model 500 shotgun.  It works on both 12ga and 20ga shotguns. 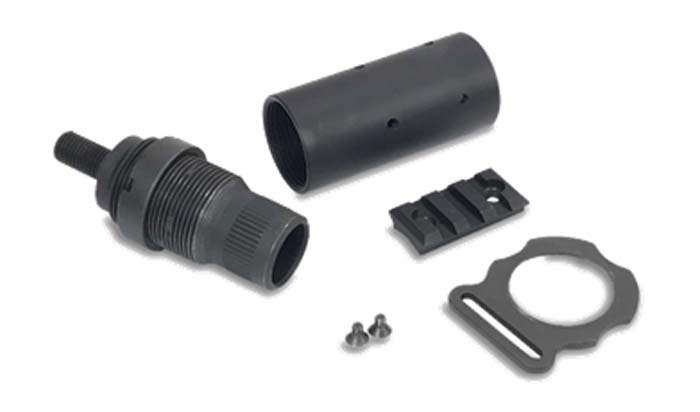 The Night Manager Accessory Mount for the Mossberg 500 & Maverick 88 consists of a machined steel barrel nut/threaded adapter and an aluminum shroud.  The aluminum shroud attaches to the adapter and is drilled and tapped along the bottom and sides for mounting Picatinny rail sections.  Its unique design allows the shroud to rotate to orient the attached Picatinny rails where needed and then uses an AR-15 castle nut to lock it down in the desired location.  By mounting accessories on a tube extension, it allows use of the full length of the shotgun’s forend, which often can be short on law enforcement models.  It also prevents accidentally turning lights and lasers on or off while firing the shotgun due to recoil. The Night Manager also includes a sling mounting plate that can be installed to attach the sling on the right, left or bottom of the shotgun. 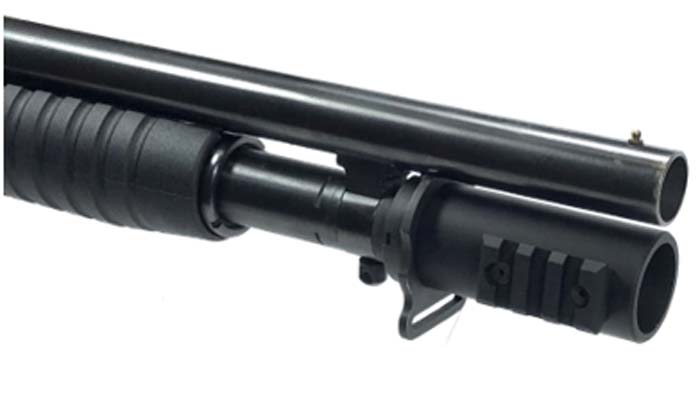 The Night Manager Accessory Mount for Mossberg shotguns comes complete with everything needed to mount the extension and includes a 3-slot section of compatible Picatinny rail, fasteners, and sling mount.
The Night Manager is also available for the Remington 870, 1100, 11-87, the H&R Pardner pumps and Hawk 982 as well as the Mossberg 590, 835, 5500 and the 9200. SOLD SEPARATELY  For these shotguns the Night Manager is also magazine tube extension and boosts shotshell capacity by +2 rounds. Mossberg 500 and Maverick 88 version does not extend magazine tube capacity.
Its after 2AM on a night like any other. Maybe you're home alone with the family, or maybe you're responsible for 100,000 square feet of warehouse after hours... a suspicious noise, a door found ajar... suddenly the situation has changed dramatically and local Law Enforcement could be half an hour away - or more. Facing the unknown you have to bring your A game and you need the deck stacked in your favor. You reach for the most trusted tool in your bag of tricks - a 12 gauge shotgun. Maybe its a pump, or maybe its a semi-auto. Regardless, you've come to understand its awesome power and legendary reliability. But YOUR shotgun is a bit different from the rest. Its equipped with the Choate Night Manager and now it is you that needs to be feared...
NIGHT MANAGER HAS THE UPPER HAND
CRIMINALS DON'T FIGHT FAIR, WHY SHOULD YOU?
Made In The USA!
Previous Post
Next Post